Those of you who know me know that I’ve spent most of my life rather hopeless in the kitchen. However, in recent years – and especially over the past months – I’ve become more adept in the ways of cooking. Still, while I’ve managed to turn myself into a competent, […]

Those of you who know me know that I’ve spent most of my life rather hopeless in the kitchen.

However, in recent years – and especially over the past months – I’ve become more adept in the ways of cooking. Still, while I’ve managed to turn myself into a competent, albeit largely unexciting cook, the vagaries of baking remain beyond my grasp.

Anyone who knows anything will tell you that baking is as much art as science, a delicate dance where the slightest change in quantity and/or quality of an ingredient can completely alter the outcome. Not to mention all the specificity with regard to times and temperatures and a dozen other variables.

Even so, with the help of people in my life who are truly gifted in that arena, I have found myself slowly but surely learning the ways of the baker. Now, I’m by no means good or even competent when it comes to baking, but I’m making progress.

And I’ve had VERY good teachers.

As a way to celebrate the summertime, I thought it might be nice to share some of the recipes that we’ve enjoyed in the past. While I’ll confess to having tried and failed to make most of these delectable treats, I can tell you that I have definitely succeeded in eating said treats when they were made by someone more capable than myself – and they are delicious.

These are all fruit-driven recipes (well, except for our inclusion of a Maine stalwart – we couldn’t run this story and NOT have whoopie pies in the mix). The majority feature fruits that are in season, but you should know that in almost all cases, frozen will serve you just as well. And while there’s a pie crust recipe included here, you’ll be just fine using your own or even store-bought – it’ll be tasty no matter what you decide.

So here you are, a collection of pies, cakes, scones and breads, along with whoopie pies and, as an aperitif, a little homemade blackberry liqueur that will pin a boozy button on your big baking adventure.

Combine blueberries, sugar, flour, cinnamon and salt. Pour into a pastry filled pie plate. Dot butter over the top of the berries and sprinkle with lemon juice. Add the top as a lattice or a solid crust and pinch edges to seal. If you choose not to do a lattice crust, use a knife to create a few vent slices in the top crust.

Bake at 400 degrees for 40-50 minutes. The pie is done when the berry filling is bubbling.

Combine strawberries, rhubarb, sugar, flour, cinnamon and salt. Pour into a pastry filled pie plate. Dot butter over the top of the fruit and sprinkle with lemon juice. Add the top crust, pinch edges to seal. With a knife, create a few vent slices in the top crust.

Bake at 400 degrees for 40-50 minutes. You’ll know the pie is done when you can see it bubbling through the vents in the crust.

2 1/2 cups all-purpose flour, plus a few tablespoons for dusting the board

To make with a pastry cutter, mix 2 1/2 cups flour and salt in a bowl. Scatter the butter cubes over the flour mixture and toss to combine. Cut the butter into the flour mixture with the pastry cutter until the dough looks crumbly and is in pea-sized pieces. Sprinkle a few tablespoons of the ice water over the dough and work the dough with a spatula. Continue to work the dough, adding the water a tablespoon at a time, until it comes together into one large clump.

To make with a food processor, add flour and salt and pulse to combine. Add butter cubes and pulse until the butter is the size of peas. With the machine running on low, add the ice water a tablespoon at a time until the dough begins to clump together and begins to form a ball.

Place the dough onto a floured board and divide into two equal pieces. Form each into a flat ball and wrap in plastic. Refrigerate for 30 minutes.

On a floured board, roll one of the pieces of dough into a circle. Move from the center to the edge, turning and flouring to keep it from sticking to the board. Continue to roll it out until it is large enough to fit your pan with enough overlap to seal the crusts together. You can fold it or drape it over the rolling pin to help move it to the pie plate, if that’s helpful. Repeat for the top crust.

Beat the eggs and the sugar with a mixer for 5-7 minutes. The mixture will lighten in color and it will almost double in size. Add the butter, vanilla and lemon zest. Mix for 2 more minutes. Stir in the flour until just combined, and then add the blueberries and stir until they are mixed throughout the batter.

Spread in a buttered 9 x 13 pan. Bake in a 350-degree oven for 40-50 minutes. The top of the cake should be lightly browned and a toothpick inserted near the center should come out clean.

Beat shortening, milk, sugar, egg and vanilla together in a large mixing bowl until smooth. In a separate bowl, whisk the flour, cocoa powder, baking soda and salt. Add the flour mixture to the wet mixture and combine until just smooth.

Drop batter in rounded teaspoons onto ungreased cookie sheets, about 2 inches apart. (They should rise and expand a lot.) This recipe should make about two dozen cookies.

Bake at 375 degrees for 8 to 10 minutes. The cookies should be set in the middle before coming out of the oven. Allow them to cool on the baking sheets for several minutes before removing to racks to finish cooling.

Beat together all ingredients until smooth.

To make the whoopie pies, spread the filling onto the flat side of a cookie and top with another cookie of approximately the same size. Wrap individually in plastic wrap until ready to serve.

2 tbsp sugar plus 1 tbsp for dusting

Combine flour, 2 tbsp sugar, baking powder and salt in a medium sized bowl. Cut in the shortening or butter until the dough is coarse.

In a small bowl, whisk together the egg yolks and half and half. Add this to the flour mixture, stirring to make a soft, shaggy dough. Fold in the chocolate chips and the raspberries.

Turn the dough out onto a floured board and knead 20 times. Flatten the dough into a disc approximately 1 inch thick. Cut the disc into 8 wedges. Brush the wedges with egg white, and place them onto an ungreased cookie sheet, a few inches apart. Sprinkle the wedges with sugar if you choose.

Sift the flour, sugar, baking soda, salt and cinnamon together in a large bowl.

In a medium sized bowl, combine the eggs, vegetable oil, strawberries and pecans. Add to the sifted ingredients, stirring until well combined.

Pour the batter into a greased and floured 9×5-inch loaf pan. Bake at 350 degrees for 1 hour.

Cool bread in the pan for 10 minutes. Remove from the pan and cool completely on a wire rack.

Add the flour, salt and sugar to a food processor. Pulse a few times to combine. Add the shortening and butter to the flour mixture. Pulse until the mixture is coarse and consists mostly of pea-sized pieces.

Add the water 1 tbsp at a time, pulsing after each addition. Keep adding water until the mixture starts to stick together in a large clump.

Turn the dough out onto a floured board and divide into two pieces. Form each piece into a disc without overworking the dough. Wrap each piece tightly with plastic wrap, and chill in the refrigerator for about an hour.

Combine the berries, lemon juice, salt, cornstarch and sugar in a large saucepan. Cook over medium heat until the mixture thickens. Remove from heat and add the vanilla. Allow the mixture to cool for about 30 minutes.

On a floured surface, roll out one of the discs of pie dough into a large rectangle. Transfer the dough to an ungreased cookie sheet. Spread the jam over the center of the crust, leaving a 1 1/2-inch border around the edges.

Roll out the second piece of dough into a rectangle, approximately the same size as the first.

Brush the beaten egg along the border of the bottom crust. Place the second crust on top, aligning the edges as best you can and trimming as necessary. Press the edges down to seal, and crimp by hand or with a fork. Cut slits into the top crust.

Bake for 35-40 minutes or until the crust is a light golden-brown color. Remove from the oven and allow to cool.

For the glaze (optional):

In a small bowl, combine the powdered sugar, vanilla and 1 tbsp of the milk. Stir to combine. Continue to add milk a little bit at a time until the mixture forms a thick paste.

Spread the glaze over the crust.

In a large mason jar, combine the blackberries and the lime zest and muddle until you see some of the juices release from the fruit. Add the brandy and the vodka and stir to combine. Place the jar in a cool dark place for five days. Strain the mixture with a fine mesh strainer, using the back of a spoon to help release any liquids, and then filter through a coffee filter. Discard any solids.

To make the simple syrup, combine 1 cup of sugar and 1 cup of water in a small saucepan over medium heat. Stir until sugar is completely dissolved. Remove from heat, and let cool.

Combine the blackberry infused liquid with 1 cup of the cooled simple syrup. Let it rest for at least one day. Store in the refrigerator for up to two months.

Note: This also works with raspberries!

Fri Jun 25 , 2021
As the new school year approaches, you might be dreaming about meal planning and preparing perfectly portioned dinners your whole family devours. In reality, as those late afternoon hours fill with homework, after-school activities, and the occasional full-body tantrum, the best laid supper plans often go awry. That’s why these […] 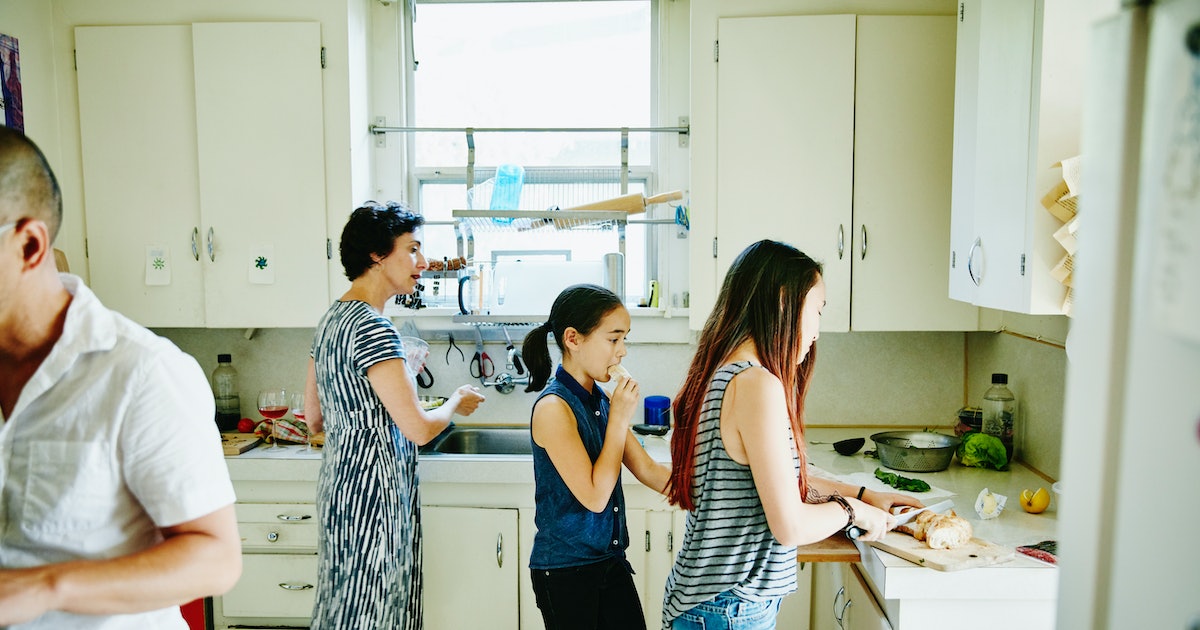