click to enlarge HOLDEN HINDES Amy Guo takes an order just after the truck opened for the evening. At 2nd Shift Brewing, a bright red truck emblazoned with […]

At 2nd Shift Brewing, a bright red truck emblazoned with the name Sando Shack sits in the parking lot next to the brewery’s patio seating. Co-owner Amy Guo leans out the window, guiding customers through the menu, while her partner, Dan Jensen, drops chicken and pork into the fryer behind her. The whiteboard hanging on the side of the truck lists the truck’s staples: the Chicken Katsu Sando, the Sweet and Spicy Chicken Katsu Sando, and Korokke, a vegetarian Japanese croquette.

A food truck serving Japanese sandwiches is quite a departure from Guo and Jensen’s original plan, but they are making the most of an unexpected situation. From Seattle, the pair moved back to Guo’s hometown of St. Louis a year ago with plans to open a restaurant called Hello Poke at the forthcoming City Foundry. However, just after they made the move, City Foundry’s opening was delayed, tabling the food stall indefinitely. Guo hopes Hello Poke can open later this summer.

But Guo and Jensen are not sitting around and waiting. In the meantime, they launched Sando Shack, first as a series of pop-ups and now as a truck appearing a few times a week at breweries, events or parks around town. So far, the truck has appeared at 2nd Shift Brewing, 4 Hands Brewing Co., Tower Grove Farmers’ Market, Laumeier Sculpture Park and Cortex Commons.

“We usually try to hit up places that don’t serve food so it can be a good partnership for both parties,” Guo says.

Guo and Jensen appreciated the variety of Asian-inspired cuisine available in Seattle and saw an opportunity in St. Louis to introduce some of their favorite foods to a much less saturated market. The restaurant’s menu is centered around Japanese sandwiches, served on toasted white bread with a generous helping of colorful cabbage slaw and potato chips on the side. Along with the aforementioned options, varieties include Chicken Katsu — a thin chicken breast cutlet dredged in flour, egg and panko, and then deep-fried — as well as Spicy Shrimp Katsu and a Beef Katsu Burger. Deep frying the burger patty keeps all the juices inside, Guo says.

The truck also offers daily specials, such as a Chicken NanBan Sando, and rotating menu items like the Pork Tonkatsu Sando. As Guo explains, the menu changes every time the truck is out.

“My husband Dan is the one who cooks everything,” Guo says. “He’s been in the restaurant industry all his life. He picked up on the Asian-style cuisine when we were out in Seattle. There’s a lot of Asian-inspired cuisine out there in Washington. One of the things we really liked were the Japanese-style katsu sandwiches, so he picked up on that with his restaurant experience, and then he developed the menu that we currently have.” As for side dishes, Guo teases that there is more yet to come.

“We want to develop more sides,” Guo says. “We did fries one time, and they were a huge hit. We did togarashi fries, curry fries and nori fries, and people loved those, so we’ll probably bring those back sometime. We’re trying to get exciting new menu items on board and keep developing with these different types of Japanese ingredients.”

Guo, who completed her MBA in 2017, works the business side of the operation and is in charge of running the social media and putting together collaborations, a role that uses her business-marketing background. Though she works the truck every time it is out, she is usually at the window while Jensen prepares the food.

Guo looks forward to filling out the staff of the truck so they can take it out more often. Currently, with a couple of part-time employees, the load is manageable, but they generally spend one day prepping and one day serving.

“Right now, we’re doing two or three events per week, but we want to have that grow to five to six times per week,” Guo says. “If we can have more people, then we could probably bring the truck out twice in one day, at different locations.” 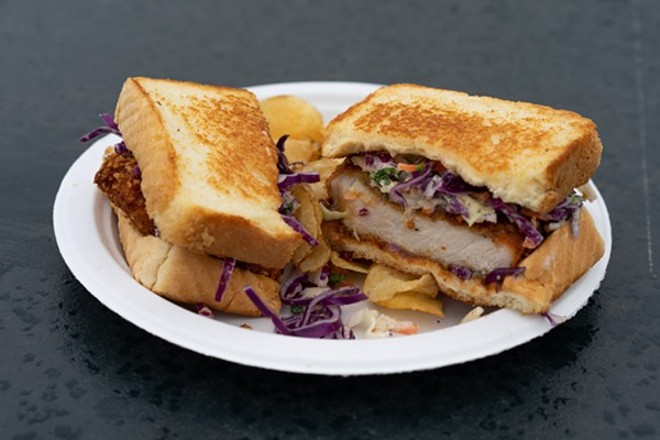 They have also considered setting up at 9 Mile Garden, but Guo wants to focus on getting Hello Poke up and running and maintaining the mobility of the truck for now.

“Looking forward, hopefully next year if we have enough staff, and everything is in order with the City Foundry, we can get out to 9 Mile.”

Guo and Jensen may have not planned to start Sando Shack before moving to St. Louis, but they insist it is not just a way to pass the time until Hello Poke goes live. Instead, the pair are committed to maintaining both brands as long as they can manage.

“We’re trying to set ourselves apart in the sense that it is Japanese-style sandwiches, but we put our own twist on it,” Guo says. “We really focus on the katsu aspect, and it’s like hot-and-savory sandwiches made to order. We want to have fun with the menu and keep it exciting and fresh and bring new menu items out each time.”

Serve up a slice of sweet taste | Food items

Tue Jun 29 , 2021
Pie is mouth watering any time of calendar year, but specially when seasonal fruits are included in the recipe. When the weather warms up, mouthwatering blueberries are in year, creating this an ideal time to enjoy some blueberry pie. According to Peggy Brusseau, writer of “The Contented Vegan” (Head of […]

Comfort is number one