Nick’s Seafood Pavilion was an institution at the Yorktown riverfront, owned by beloved local icons, Nick and Mary Mathews. (WYDaily/Nancy E. Sheppard Historical Collection) YORKTOWN — This summer, we have journeyed across the Hampton Roads region and beyond to visit beloved, abandoned and forgotten places. For the finale of this […]

YORKTOWN — This summer, we have journeyed across the Hampton Roads region and beyond to visit beloved, abandoned and forgotten places. For the finale of this limited summer series, we are going to venture right back home to the Yorktown riverfront and visit one of the more iconic landmarks which was owned by one of most beloved couples of the Historic Triangle: Nick’s Seafood Pavilion.

Nicholas (Nick) Matheos (Mathews) emigrated from the Isle of Karpathos (Greece) to New York in 1920. Maria (Mary) Pappamihalopoulou emigrated from Sparta and worked as a dressmaker, selling her pieces for 30¢.

In a 1980 interview with journalist Blaine Harden, Nick recalled meeting his wife, saying, “In New York one day, in the Greek Orthodox cathedral, that is where I met Mary. She was singing in the choir. I sort of picked her up.”

The two married and shared a dream of becoming American citizens. In that, the couple decided to relocate to Yorktown. Nick recalled, “I want to be American citizen… so what better place to live than here where independence was won?”

Along the sleepy riverfront that once saw historic battles and just upwind of the Yorktown Naval Mine Depot, Nick founded a lunch counter in 1944. The modest building had 35 seats and it quickly turned into a must-stop destination.

Nick’s culinary creations were known around the world to include Lobster Dien Bien, Shrimp Gavetsi, and Seafood Shish Kebob.

“Shish kebob was my creation,” Nick said. “I thought it up about seven or 10 years ago. It has shrimp, scallops, lobster, onion, tomato, mushrooms — all cooked in real butter. Ah, hah, they talk about it all the way to California.”

Nick was not at all bragging. His delicious dishes not only attracted locals and tourists, but drew in the likes of high profile celebrities and dignitaries. The running list included: John Wayne, Elizabeth Taylor (who was married to the late Sen. John Warner at the time), Tennessee Ernie Ford, Randy Travis, Fred McMurray, the torch runners for the 1980 Olympics, many federal government officials, and governors from all fifty states.

“We always busy,” Nick said. “We known the world over, I tell you. The kings and queens, the stars and the politicians, we got ’em all here.”

Because of the popularity of the pavilion, the restaurant expanded in 1970 to include a total of 440 seats. The walls were painted in a shade of purple and there were various thematic rooms: the “old dining room” (referring to the original portion of the building), the Triton Room, and the “Nile Room” (after a fountain located in the space which was supposed to resemble the Nile River). Mary exhibited her sculpture collection, which she became known for.

But Nick’s Seafood Pavilion was more than just a spot to eat fresh and delicious seafood. It was a place that felt like home and its proprietors embodied the spirit of what it means to be in Yorktown.

The Spirit of Yorktown

While Nick Mathews was known for his delicious meals, he was more than just a chef. He and Mary both embodied the true spirit of what the Historic Triangle is known for: hospitality, selflessness, and a feeling of home. The Mathews’ joy, passion, and loving nature resonated to anyone who ever encountered either of them.

Nick and Mary had a warm, welcoming spirit towards anyone who came to their door. They hired employees that needed a hand up to gain the success that the couple found. In 1960, the Mathews drew from their own immigration experiences and hired Elias Bichara, a Cuban refugee who, along with his family, were sponsored by Yorktown Baptist Church.

The couple’s generosity knew no bounds. Though never having children of their own, the Mathews became everyone’s mother, father, friend, and neighbor.

In 1976, a group of Boy Scouts from Washington were on the final leg of a cross country bicycling journey. Mary invited the group into the restaurant for dinner. While the scouts enjoyed their meal, three of the bicycles were stolen. Once Mary discovered this, she called the local sheriff’s office. Not only was a report given, but Mary asked the deputy to locate a bicycle shop and ask the owner to reopen so she could replace the boys’ bikes. That evening, Mary surprised the scouts with three new bikes and also arranged for their lodging and breakfast the next morning.

The couple also had a deep pride for their adopted home in the Historic Triangle. Both Nick and Mary worked for civic causes and used the money they earned to give back. In 1972, the Mathews’ paid for Yorktown’s electric bill when it fell in arrears to the tune of $212. “How anybody can stand this historic Yorktown to be in the dark,” recalled Mary. “I always hate the dark.”

On these grounds was built the Yorktown Victory Center, now known as the American Revolution Museum at Yorktown (or, as the locals affectionately refer to it as, “ARMY”), located at 200 Water Street.

The couple was also known for their fervent support of the American military. Young sailors would get off on buses near the restaurant and, no matter what time of day it was, all they had to do was knock on the door and there was Nick and Mary ready to greet them with a cup of coffee and a phone to call the nearby base to arrange transportation.

Mary had the honor of being the first immigrant chosen to sponsor a U.S. Navy ship, the aptly-named USS Yorktown (CG 48); a Ticonderoga-class cruiser. En route to Pascagoula, Miss. in 1983 to christen the vessel, the Historic Triangle received notice that Nick Mathews, a pillar of the community, philanthropist, and beloved local legend, tragically passed away on April 14.

However, with Nick’s spirit close to her heart, Mary continued on to Pascagoula, christening the ship with the words, “In the name of the United States and in memory of my husband Nick, I christen the Yorktown.” To watch highlights the christening ceremony, click here.

Nick’s loss caused profound grief for the residents of the Hampton Roads Peninsula. A humble man with a generous spirit, he was remembered by friends who were more like family to him. Soon following Nick’s death, well-known local journalist Park Rouse wrote, “[He] was the most generous man I’d ever met.”

The following year, the Yorktown Victory Center displayed a special exhibit in honor of Nick called, “An American Dream.” The exhibit displayed items from the Mathews’ wedding, a bench from Ellis Island, and other mementos telling Nick’s own story of coming to America and achieving not just wealth in finances, but of spirit.

Mary continued on with Nick’s Seafood Pavilion in honor of her husband and with the help of her dedicated staff. She loved the officers and sailors that served aboard USS Yorktown (CG 48) as if they were her own; always ready to offer a meal when they would come to the restaurant.

When Mary died on Sept. 23, 1998, she bequeathed nearly all of her estate to the Jamestown-Yorktown Foundation. She did so that others would know, as stated in Mary’s own words, “…the blessing of freedom and democracy that commenced in my native Greece and here…”

The couple that gave so much to the community that they loved were buried together in a marble tomb that sits on the property of the American Revolution Museum at Yorktown. It is there that they continue in their eternal rest.

U.S. Ambassador to Greece, Geoffrey Pyatt, said, “Nick and Mary Mathews are great examples of both Greek resilience and of how Greece and America have stood together over the years, joined by our common experiences and values.”

While Nick’s Seafood Pavilion continued on for a short while following Mary’s death, in 2003, the York County Board of Supervisors paid $3 million for all of the property that once belonged to Mary, including Nick’s Seafood Pavilion. When the Board voted to tear down the restaurant, many expressed outrage as locals felt that this was disrespectful to the memory of the beloved couple.

However, Hurricane Isabel made a decision on behalf of the Board and advocates for the restaurant. When it roared into the area in September 2003, the iconic building that served generations of locals, visitors, celebrities, politicians and dignitaries; a place that services members called home and memories were made, was left very badly damaged. It was ultimately decided that the best course of action was to demolish the building instead of restoring it.

After demolition was completed, the land that once belonged to the Mathews and housed the beloved restaurant was redeveloped into what is now known as Riverwalk Landing. Where Nick’s Seafood Pavilion once stood was built a parking deck. If you were to visit the riverfront district today, there is virtually no trace of the couple that gave so much of themselves to the home that they took so much pride in.

After twenty years of service, including as part of the last incident of the Cold War, USS Yorktown (CG 48) was decommissioned in 2004 and has since sat rusting away as part of the U.S. Navy’s inactive fleet in Philadelphia.

For locals, the Mathews are never very far away. Their patriotism is celebrated through the hallways and exhibits at the American Revolution Museum at Yorktown. The Mathews Legacy Society was created for the Jamestown-Yorktown Foundation to honor members who have established planned gifts for the foundation and its missions.

Nick’s stories, Mary’s maternal nature, and the generous spirit that they gave so willingly defined what it means to be from Yorktown. They set a tone that continues to resonate even long after they left this world and the physical symbols of their lives removed from the landscape.

Perhaps its in Nick’s own words that said it best when defining the couple’s life so well lived: “Hard labor, decency and sweat on the forehead, that’s how I made it.”

Always be informed. Click here to get the latest news and information delivered to your inbox

Harvesting and Feeding on Squash Blossoms at Residence

Sun Aug 29 , 2021
Numerous persons out there function difficult to expand lovely bouquets and/or bountiful crops, but clever gardeners know that squash plants offer the two with very very little exertion. Summertime squash, which most of us know as yellow squash and zucchini, are sprawling vegetation that are unbelievably uncomplicated to grow. The […] 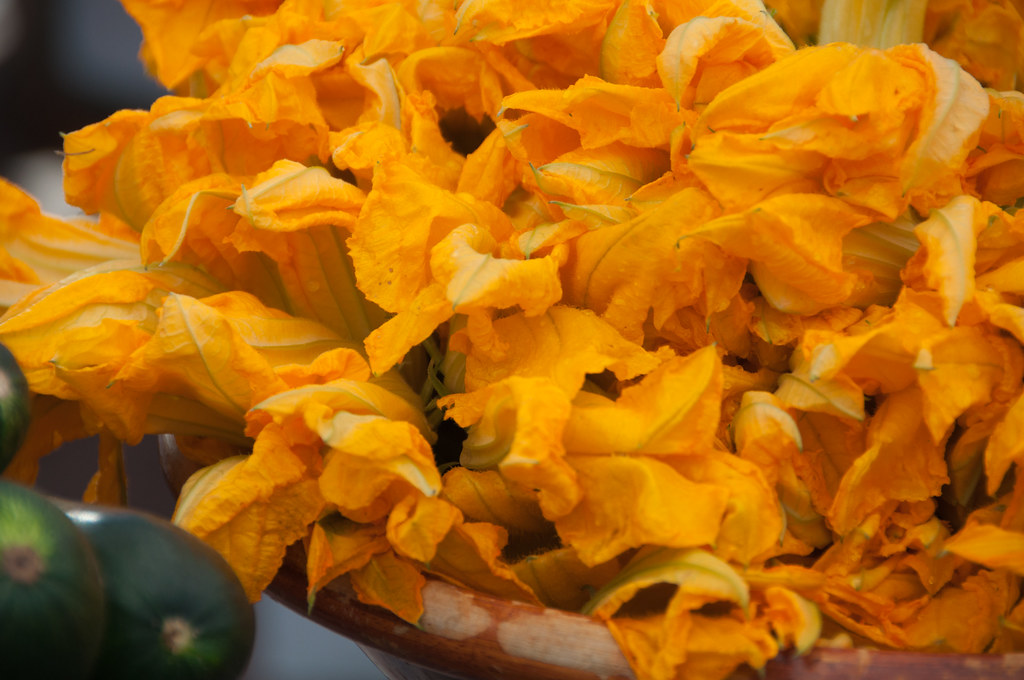